A shortage of chassis and truck drivers is contributing to carriers’ cancellations of final legs of deliveries in inland parts of the United States, including the Chicago, Detroit and Dallas areas, and Federal Maritime Commission Acting Chairman Michael Khouri expects “prompt” replies to FMC letters sent to carriers requesting more information on the situation, he told senators Tuesday.

The FMC on Monday announced it launched an investigation into complaints from some U.S. cargo owners that some ocean carriers are unilaterally changing service contract terms by canceling the port/container yard to final customer destination leg of cargo shipments. 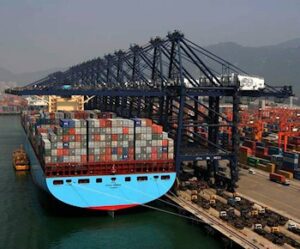 The agency sent letters Friday to shipping lines with service contract actions that have been called into question and expects responses by May 20, the FMC said in its announcement.

Following a hearing of the Senate Commerce Subcommittee on Surface Transportation and Merchant Marine Infrastructure, Safety and Security, Khouri told American Shipper that the length of the FMC’s investigation will depend on the breadth of responses it receives.

“There’s just sort of a dislocation right now as to that last truck leg, who’s responsible for it, and how it’s going to be contracted for, et cetera,” Khouri said after the hearing.
The FMC noticed the issue during its standard monitoring of shipping industry filings, Khouri said. “We saw where carrier tariffs were being amended, in terms of the difference between a yard move and a door move,” he told American Shipper.
A core issue of the investigation will be the differentiation between yard moves, for which ocean carriers are responsible for delivering cargo to container yards for cargo owners to pick up, and door moves, for which ocean carriers are responsible for taking the cargo all the way to the customer’s door, Khouri said.
During the hearing, Khouri indicated that inland shipping is currently presenting more velocity-related complications than seaports, which haven’t experienced much congestion recently.
“American cargo owners are saying their equipment is getting stuck, their cargo is getting stuck at these inland places,” Khouri told senators.
Khouri also touched on maritime industry trends, noting that SM Line Corporation, a South Korean bulk company, last week announced plans to initiate new service connecting China, Korea, Japan and the Pacific Northwest with ships previously owned by Hanjin, which went bankrupt in 2016.
A new entrant like SM Line calling on U.S. ports “makes us smile,” Khouri said. “The business shows itself to be resilient in that regard.”
However, on the port side, there is likely a “fairly large” backlog of infrastructure projects as the U.S. Maritime Administration (MARAD) has had to turn away several more than it is able to fund through utilizing TIGER and other infrastructure grants, MARAD Administrator Mark Buzby said during the hearing.
A port-specific infrastructure program developed by the Transportation Department “is essential,” the Coalition for More Efficient Ports wrote in a statement submitted to the committee before the hearing.
The subcommittee should consider funding the Port Infrastructure Development Program, created in the Fiscal Year 2010 National Defense Authorization Act (NDAA), as port projects are eligible for TIGER, TIFIA and INFRA grant funding, but there are no port-specific grant programs, the coalition wrote.
The 2010 NDAA tasked the Transportation secretary, through the MARAD administrator, to establish a port infrastructure development program for improvement of port facilities, the coalition noted.
Buzby said an increased emphasis on port funding is needed going forward.
Responding to a question by Sen. Roger Wicker, R-Miss., Buzby said he wouldn’t object to a port-specific funding program.
“Many of our larger ports are aging and our infrastructure is aging,” Buzby said. “Especially with the larger ships coming in, we need to keep a very close focus on that.”